My Trip To Auschwitz

*WARNING* - Contains sensitive content that may be distressing to some. 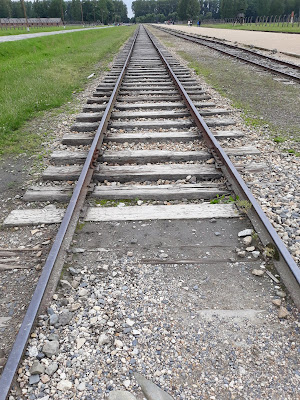 On the 26th and 27th of July I took what could be a once in a lifetime trip to Auschwitz, Auschwitz-Birkenau and Krakow with some peers, using the tour services of @Kahan_Travel. Reading about the atrocities of the Second World War is all very well and good, but it is not until you walk the ground they occurred on that you begin to realise the magnitude of such behemoth actions.

Like most UK students, I have studied WW2 from an early age and have been fortunate enough to do so in good schools and colleges with some excellent tutors. Although, overtime we become desensitised to events that we only really encounter in books and classrooms. I did not realise how emotionally-detached I was until I entered the camps. It is a fault of the modern era, in my opinion, that recent generations are so detached and unappreciative of events from the past.

We stayed at the Hotel Galicja in Oświęcim (Poland) which offered great hospitality with a picturesque and ornate exterior. On our journey to the original Auschwitz camp, the tour guide, Chuni Kahan, provided us with Holocaust Awareness booklets, a timeline of cumulative radicalism up to and including the Nazi era and some tasty food! He is such a sweet man and clearly dedicated to keeping the memory of victims alive and pursuing the communication of the knowledge and lessons that have come from the past.

First we went to the original labour camp, Auschwitz I. All the buildings are still intact, barbed wire fences in the same place, the  'Arbeit Macht Frei' gate still looming over the camp's entrance. As this was the first thing I saw, it did give a shock to my system
- I'll be honest and say that I hadn't fully prepared myself mentally, due to the previously mentioned desensitisation.
The inside of the buildings have been turned into a museum with some areas remining in their original state. All the exhibits were so detailed, each linking to the next seamlessly; from a history nerd's point of view it was amazing (I'm not trying to sound overly upbeat though!). Although, there were also some haunting exhibits in some buildings that began to put things into perspective. One room was empty, all for a glass case that scaled the length of a wall. In this case lay the remnants of women's hair...tonnes of it, some remaining in plaited form - the hair that had been scraped from their heads whilst alive. It is a Jewish belief that all parts of the body should be buried, so it shows that every Nazis action in the camp process had an ideological punishment behind it. Another room had a similar case filled with the apparatus of disabled Jews: wheelchairs, crutches, even prosthetic limbs - for context, the Nazis saw themselves as the super race and did not tolerate, what they saw as, weakness in any form. I really started to grasp emotions after seeing these and when we entered one of the final rooms. This was basically a corridor, lined for the full length of both sides with a museum case, containing suitcases, shoes, glasses, property, toys of those who had entered the camp in just the last two weeks (*not sure if exact*) of the camp's running. It was heartbreaking. You could see that they had no idea what was waiting for them when they were to disembark their trains. 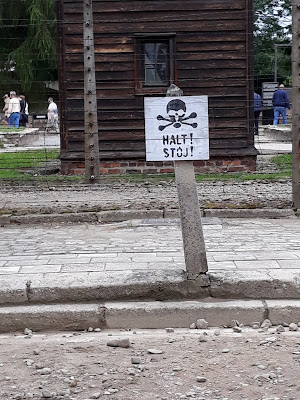 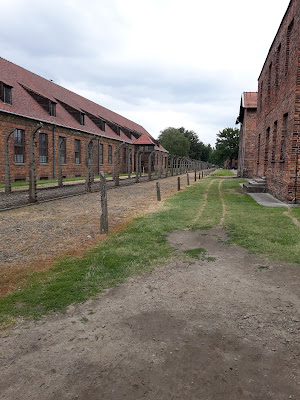 Our final destination in Auschwitz I was to the only remaining and original gas chamber on the site, the first one the Nazis used on mass, I believe. I was still mostly desensitised at this point as I am definitely one for burying my head in books and exam papers. We entered and went to the undressing chamber, it was cold and dark and things started to feel more real. The adjoining room is what was known as the shower room, the gas chamber - our group of around 15 went in and even then it felt claustrophobic...I imagined what it must have felt like when almost 1000 could be sent in there at any one time! I only became fully desensitised to the magnitude of such genocide, when I left the gas chamber and entered the furnace room - I walked freely out of a room where so many tragically lost their lives, on the singular and farcical premise of religion.

We left on our coach and by the afternoon we had reached Auschwitz-Birkenau - the camp most popularly depicted in film and drama. Just standing in the carpark a couple hundred yards away you could see the immense entrance building, with its foreboding architecture and cold appearance. 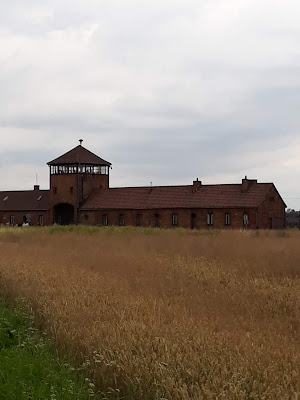 We had reached the winding road to Auschwitz. First, I went into the guard tower, where you can get a 360 degree view of the camp...all 40 square kilometers! The railway tracks inside are just as you would see in the movies, although up close it makes you feel disconcerted. Most of the camp was brought to rubble by the Nazis when the Allied invasion was reaching the area - they wanted to destroy all the evidence. But there are quite a few of the wooden living cabins still erect - these were basically cattle sheds. The two outer walls were lined with 'beds' - in essence they were three stacked wooden pallets: 5 people to a level, around 40 stacks in a cabin; they could house between 400 and 600 people if required. The conditions in which they lived were appalling, which is a complete understatement. We walked the entirety of the camp that day. My feet were in extreme pain from the rocky ground in a pair of Nike Revolution 3, imagine how their feet felt in thin material and slot of the time barefoot! 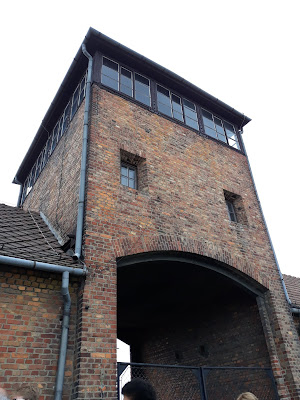 There was something called a death march in this camp, where the prisoners were marched from the labour area to the concentration area, which was separated off by a gate and some forest. It was exhausting for us to walk it even though we had eaten and drunk and slept...There is a pond in the forest that looks like it is mouldy, it is green and practically opaque - this is the pond that they threw the ashes of victims in before they could come up with a sustainable alternative for disposal. We saw the cleaning rooms, where they were shaved and de-humanised upon arrival, where they were tattooed and lost all their rights, where some were tortured and experimented upon. We were told stories from accounts: of how babies were often times snatched from their mother's arms 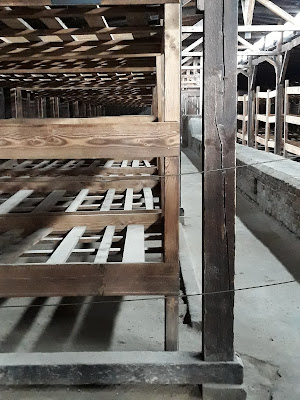 and their heads smashed against brick walls; how families were split up and even to this day may not even know if their relatives survived. On the day of this trip, we were extremely lucky to be there at the same time of a survivor of the camp - who had been experimented on by the lead Nazi doctor, Joseph Mengele, along with her twin sister (who did not survive). When you see and hear first hand what someone went through, the enormity really does set in. She travels back every year, to share her story with those who will listen, all to keep the knowledge alive in the hope that this era of history will not repeat itself. 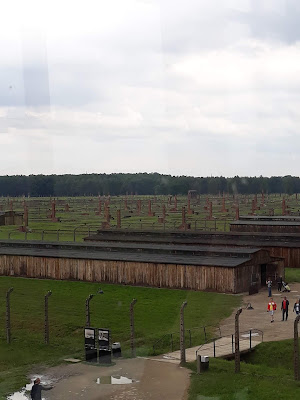 Nobody can deny this genocide occurred - the evidence is real, visible and available in its masses. What is important is that people continue to share their knowledge, memories and thoughts; to not desensitise current and future generations otherwise we run the risk of history repeating itself. History does repeat itself, all the time, but it doesn't have to if we as humans learn from our mistakes and choose a different path.

In our time of worldwide political instability, good people must be vocal and not laydown for violence and extremism, or else history will rear its ugly head, and in this era of technology - who knows how it would end... 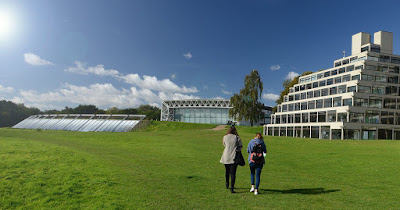